What’s life without a good photobomb now and again? The sometimes-frustrating and always hilarious moments captured forever on our timelines and profiles have become a part 2018’s everyday life. While photobombs can make any event planner’s job a bit more difficult (or lead to comic gold and unexpectedly interesting moments), they’re not going anywhere.

Celebrity photobombs are even better. Speaking of which, join us as we take a stroll along the highlight reel of Instagram’s best celebrity photobombs. Some are amazing, some are cringeworthy, but all are worth taking a moment to marvel at.

Oh yeah, and don’t forget to drop us a line if you want to take your photo branding to celebrity photobomb heights of memorable.


You know what’s even better than catching supermodel and winner of season 21 of America’s Next Top Model, Winnie Harlow, smiling at her date? Catching the one and only Prince Harry (of British royal family fame) goofing off in the background.

Our American hats are off to you, Harry.


You don’t see someone get the upper hand on Kanye or Kris every day, but James Harden isn’t just anybody. James is a six-time NBA all-star, three-time NBA first-teamer, and gold medal Olympian who’s just a bit quicker than your average joe.

He managed to find Kanye and Kris Jenner napping on a couch and couldn’t pass up the opportunity to get a selfie with part of America’s first (social) family. Hey, we don’t blame him. We wouldn’t miss that opportunity either.


Keeping the Kayne train going, here’s one of none other than Kim and Hillary with Kanye lurking in the background.

It’s not often that two of the only people in the world who are first-name-famous get photobombed. When it is? You can pretty much guarantee that Kanye’s going to be involved.


We love this intimate picture of Ariana Grande and Big Sean (RIP to one of the most endearing relationships in pop music). You can pretty much feel their love. You can also feel or clearly see the complete and utterly silly face of the one and only Mr. Scooter Braun.

Scooter, if you don’t know, is Ariana’s manager. He’s also pretty famous in his own right for managing a whole lot of other artists and owning two successful record labels. He’s also pretty talented at photobombing if you ask us.


Okay, this one isn’t technically a photobomb, but since when does your wedding selfie turn into a Tom Hanks selfie?

Tom was out jogging in Central Park when he stumbled into this couple’s wedding photo shoot. The result is an Instagram photobomb gone viral. You’re a good man, Mr. Hanks, no matter what that volleyball said…


There isn’t much that makes a 50 cent and Naomi Campbell selfie better than it already is. These two titans of their respective industries can steal the limelight anywhere they show up. Until our old friend Mr. DiCaprio enters the frame, that is.

Leo’s lurking in the background looking sufficiently shady. That’s a feat in and of itself. Right on time, Leo. 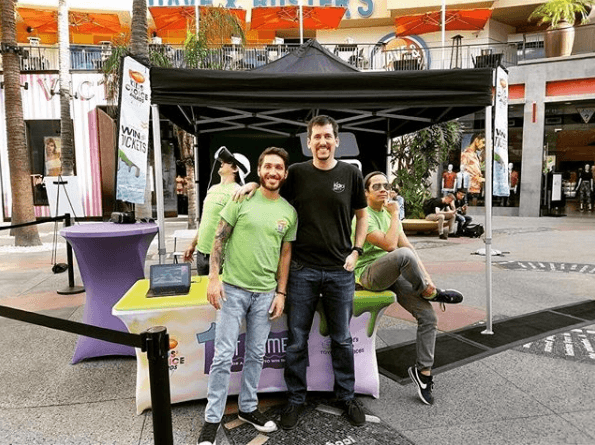 All of these Instagram celebrity photobombs are great, but you know what’s even better? When we photobomb ourselves!

Check out some of the LA Photo Party crew here at our Nickelodeon VR Slime Booth. We created this customized booth for the 2017 Kids Choice Awards. Guests were able to get slimed in VR, have a literal mess of fun, minus the actual mess.

You can see one of our crew in the background getting slimed, and another team member on the right getting silly, while we were trying to be all professional in this photo. Long live the slime, guys and gals, long live the slime.

Now that you know the best celebrity photobombs on Instagram, isn’t it time you learned about the best photo booths in the game? Whether you’re looking for a slow motion booth, a customized mobile app booth experience, or something else entirely, we have you covered.